State's Deputy Chief Minister Nitinbhai Patel ° Lecture That is, the central government, with the help of the federal government wage The increase in the salary of the employees has increased over time from time to time and in the salary payable in lease, on a ° C or ° basis basis. Equal salary of standardized pay scale, equivalent to salary payable to employees Decided what it has been widely welcomed by the comrades, Ɨ When a pay-out-in-aid The state government has increased its pay in the salary of teachers and teachers of primary and secondary schools.  School teachers' monthly Assistance to teachers and teachers, and to assist them, Į 3789090 The decision to pay salaries is given. Ȑ No further increase to the State Government Rs.78.70 Crore Will be cleaned With this benefit A total of 6609 teachers will be benefited from the education of 4835 teachers and 179 primary teachers of primary education.

The Deputy Chief Minister said that the government has implemented 7th pay package and
It has also benefited its children as well as their children, who have been associated with the education department. That's the way Children's education assistants and veterinary school teachers assist them in the school. 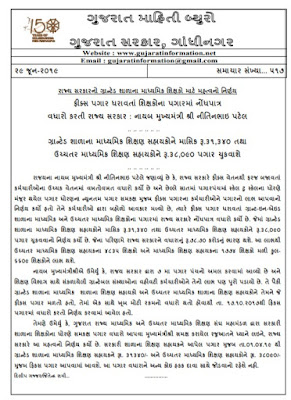 
The government has decided to make these major cities. Government paid salaries to the school's teacher, since July 01, 2014 Doctorate of the school's medical education assistant. 31340 / - and upward journey to primary school teachers. 38090 / -