Statewide School Entrance Disputes, Tantra in Tornado Standby: Chief Minister meets Rupganik in a high-level meeting at Gandhinagar, reviewing how to meet the wind storm and how to prepare for the meeting.

In the state, the storm surge will take place in just a few hours, during which Chief Minister held a meeting of the Highvelwal in Gandhinagar, the decision to postpone the state-wide school entrance festival has been decided. Currently the entire officials standby to meet the wind turbine.

A high-level meeting was held at Gandhinagar in the chairmanship of Chief Minister Rupani, discussing how to meet and prepare wind storms in the meeting. Discussion and review was done in the schools recently, when the vacations were completed in schools, it was decided to host a school admission program, However, due to the hurricane, the entire state will be held between 13 to 15 days La has taken the decision to postpone warming program.

Click here to read: 'Vayu' Thunderstorms: 35 thousand people from 74 villages in Porbandar will be relocated

In the Highvelwal meeting, 10 districts of Saurashtra where the wind storm will be affected will be given three days leave. It was said in the meeting that the entire system is currently standby for air storms, so this decision has been taken. 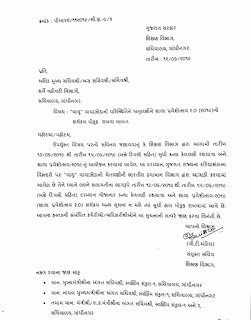