Budget 2019 Live Updates:  It has been a budget speech by FM Nirmala Sitharaman that has laid out the roadmap and announced measures to tackle several aspects of the economy. In the Direct and Indirect taxes proposals announced by her in the second part of her speech, she announced that corporate tax rate of 25% would be extended to companies that now have a turnover of upto Rs 400 crore. FM Sitharaman proposed a further thrust to Make in India and the setting up of an initiative to set up to facilitate setting up of mega plants in areas such semiconductors, laptops, solar products etc. In order encourage purchase of electric vehicles, a tax deduction of Rs 1.5 lakh was announced for those purchasing these automobiles. Lower GST on these vehicles was also proposed. The government announced a disinvestment target of over Rs 1 lakh crore and said that will continue to pursue strategic disinvestment of Air India and other PSEs. It also expressed willingness to go below 51% in non- financial PSEs. The government reiterated its intention to invest Rs 100 lakh crore in infrastructure and said an expert committee will be set up. A singly monthly return for GST was also introduced. Customs duties were altered on a number of items. 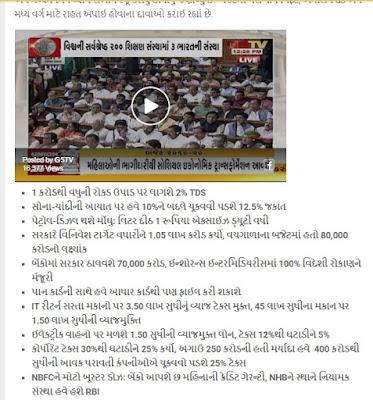