Join WhatsApp Group
Dhoran 5 ane 8 ma Napas karvano Niyam aa varsh thi j Lagu padse
Under the Right to Education Act, the students studying in primary school were not disapproved till now due to the provision that they should not fail till St. But this rule was found to have a negative impact on the quality of the students. In this regard, the Central Government was entrusted with the power of the State Governments to change the rules and not to fail in clauses 3 and 2. Therefore, the rule of failing in Std. 1 and 2 in Gujarat will be implemented from this year, said Education Department Secretary Vinod Rao.
The direct effect of not failing the students is the practice of board exams and higher studies.
Even though many students do not have the ability to read and write in the same way, they are coming to Std. Hence, the central government changed this rule. But some time ago, the debate also caught on that this rule will not be implemented this year and the rule of nullification will be implemented from next year.
The RTE Act has been passed by the Central Government and the State Governments have enacted rules in respect of the Act. Sources are saying that the state government will only have to change the rules as the RTE Act does not provide for the failure. A circular may be issued by the state education department in the coming days.
Head Teacher Replacement Rules will be created in the next few months. The government has given such assurances in one of the high court cases. A writ petition was filed in Gujarat High Court in year 1 with the submission that more than 3 persons appointed as Principal in the Primary Department have not been changed for the last seven years. In which, today the government party has presented its answer that rules for replacing head teachers are being made.
Add special effects for videos and video filters with the video effects app.

Over 100+ video effects and video filters to choose from, your videos will never be the same again. 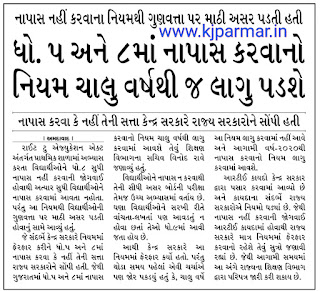