In pursuance of para 3 of GR GAD No.BYE-1196/7836/CHH, dated 27th January, 1999, the Chief Electoral Officer, Gujarat State is pleased to sanction an ad-hoc honorarium equivalent to the salary - Basic Pay + D.A. of the month of April, 2019 to the following field staff who were on the establishment of the election and connected with the work of the General Election to the Lok Sabha, 2019 held in April, 2019. 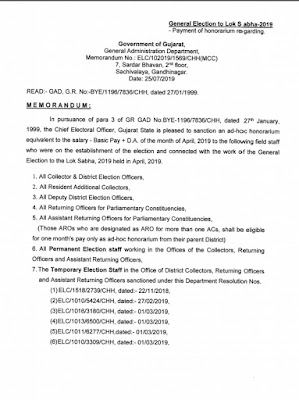 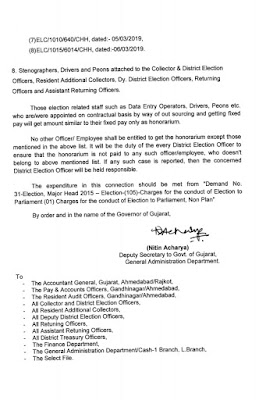 Those election related staff such as Data Entry Operators, Drivers, Peons etc. who are/were appointed on contractual basis by way of out sourcing and getting fixed pay will get amount similar to their fixed pay only as honorarium.

No other Officer/ Employee shall be entitled to get the honorarium except those mentioned in the above list. It will be the duty of the every District Election Officer to ensure that the honorarium is not paid to any such officer/employee, who doesn't belong to above mentioned list. If any such case is reported, then the concerned District Election Officer will be held responsible.
The expenditure in this connection should be met from "Demand No. 31-Election, Major Head 2015 - Election-(105)-Charges for the conduct of Election to Parliament (01) Charges for the conduct of Election to Parliament, Non Plan"