Academic eligibility has been attributed to cancellation of non-secretarial clerks and office assistant examinations. It has been stated that the exam will be retaken after increasing the educational qualification. In lieu of the standard 12 pass, the educational limit of the graduate will be fixed and the date of the new examination will be announced shortly. The state had previously qualified for Class 12 under the clerk examination for government jobs, but the government reviewed the decision and it has been decided that the qualification for studying in all government exams will be graduated. 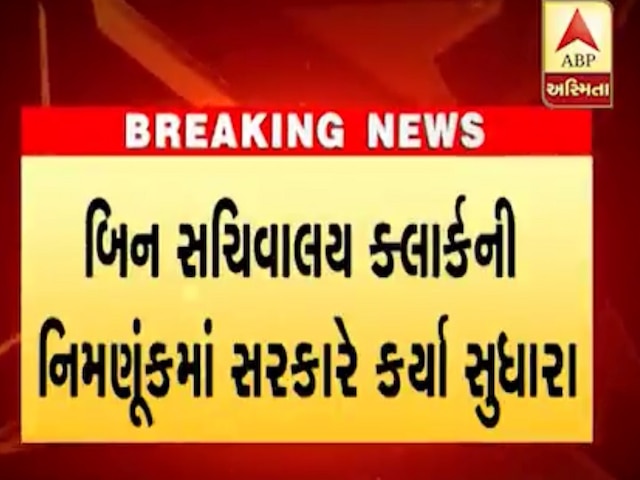 The Gujarat Secret Service Selection Board has canceled the examination of non-secretarial clerk and office assistant to be held on October 20. The examination has been canceled following the government's order.

The recruitment of non-secretarial service clerk and office assistant class III cadre of the secretariat service was to be held on October 20 for a total of 3738 vacancies. A total of 10 lakh 45 thousand candidates were to appear in the exam. As per the original declaration after the improvement in educational qualification, the application of standard applicants with standard twelve pass qualification may also be canceled.

Earlier, the exam was canceled for two different reasons. Then the exam has also been canceled a week before the exam. Thus, the cancellation of the exam is often seen as an annoyance among the examiners.

A co-operative conference and MP honors program were held in the presence of Deputy Chief Minister Nitin Patel during the election of Bid assembly of Arvalli district. The political tone of the election was organized and the deputy chief minister also made one or the other excuse for the election campaign. Nitin Patel made a statement during the program that he did not want to know the specific reasons for canceling the Examination of the Beans secretarial clerk. Also, the secondary service selection board was told to postpone the examination till the government gives new instructions.

During the by-election of the Byd Vidhan Sabha, the BJP has now fielded the Deputy Chief Minister of the government in one way or another. The Choila village of Baid created an atmosphere where the BJP had made similar efforts to indirectly campaign in the by-elections in the district. An attempt to establish influence on the party workers was politically viable by pulling the co-operative leaders and especially the Patidar leaders on stage. 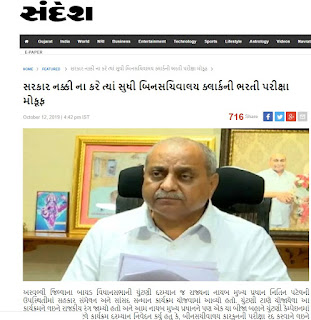 
The Deputy Chief Minister of the state, Nitinbhai Patel, was present at the co-operative convention and MP's honor function, presenting the development story of the state government and indirectly trying to attract the stakeholders and locals by talking to the government. For the BJP, thus achieving a bypass seat, the BJP has taken strength from all fronts, even when it is in a state of panic. In the meantime, he did not have any specific information about why the exam was canceled due to cancellation of the Bean Secretariat clerk's examination, saying that the government has instructed the secondary service selection board to postpone the examination where the government does not make a new decision, Shankar Singh Vaghela. The BJP also referred to Shankar Singh Waghela as his father on the issue of deceiving Mahendra Singh and where did the elder go somewhere? It was made clear that he was unaware of what was said.