In a Diwali gift to central government employees and pensioners, Narendra Modi government has increased the dearness allowance for employees by 5 percent. The hiked rate will be applicable retrospectively from July this year.

"The government has increased the DA from 12 percent to 17 percent," Union minister Prakash Javadekar said after a Cabinet meeting today.

Around 50 lakh central government employees and 65 lakh pensioners will be benefited from this announcement. The hike  ..

Ahead of Diwali festivities, the Union Cabinet on Wednesday announced 5 per cent dearness allowance (DA) for the central government employees and pensioners.

The move is likely to benefit nearly 1.12 crore government employees and pensioners.

A decision to this effect was taken during a meeting of the Union Cabinet, which was chaired by the Prime Minister. 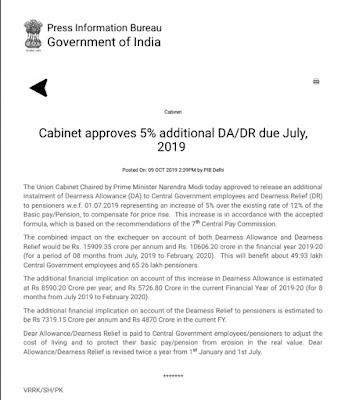 
Calling it a ‘Diwali gift’, Javadekar said the raise would cost the exchequer nearly Rs 16,000 crore. The DA has now been increased to 17 per cent.

“Under the leadership of Prime Minister Narendra Modi, several decisions have been taken. In good news for government employees, Dearness Allowance has been hiked by 5 per cent,” Javadekar said.

In a cabinet briefing at Shastri Bhawan, Javadekar also announced 5,300 families from PoK, who had settled in regions others than Jammu and Kashmir and had later come to the Valley, will be provided with Rs 5.5 lakh each.

Stay connected with www.tethtatguru.info for latest updates
Important: Please always Check and Confirm the above details with the official website and Advertisement / Notification.
Tag : news report